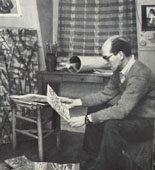 Breaching the extremes of reality and abstraction, Le Moal and a small group of fellow artists including Jean Bazaine, Alfred Manessier, and Gustave Singier established a new post-war aesthetic of pure poetical expression, creating a fluid dialectical exchange between man and nature, comparable in literature to Proust and Joyce. This group, first known as Témoignage, was initially formed by Marcel Michaud in 1938 when they exhibited at René Bretau’s Galerie Matières, on Rue des Canettes, in Paris. During the war, despite the Occupation,  they managed to hold two further highly important and controversial exhibitions, in Paris, in protest of the Nazi’s denigration of abstract art as “Degenerate”. The first, organised by Jean Bazaine and André Lejard at Galerie Braun in 1942, was Peintures de la Tradition Française,  (a title with which the group would become associated), it included Le Moal, Bazaine, Manessier, Singier, Pignon, Gischia. The second, Douze Peintres D’Aujourd’hui, was in 1943 at Galerie de France.

Born in Ardeche, Le Moal enrolled at the École des Arts Decoratifs de Paris in 1929, before opting to study painting at various Academies in Montparnasse, and Montmartre. At this time he established lifelong friendships with Roger Bissiere, and Alfred Manessier with whom he obtained a studio in 1934 on rue Notre-Dame-des-Champs, before moving to the more bohemian area of rue Le Verrier which he retained for much of his career. Until 1938 he attended Académie Ranson, studying under the influential Jean Bertholle. Here he worked in the company of other young artists of the new generation of avant-garde, including Jean Bazaine, Etienne-Martin, and François Stahly. Le Moal would also regularly participate in the informal Saturday meetings organised by Francis Gruber to exchange and discuss  ideas. He began to exhibit at salons such as the Salon des Jeunes Artistes, and the Salon d’Automne, and was soon recognised as a force of the Jeune École de Paris. In 1937 he contributed to the Exposition Universelle de Paris, and in 1939 he worked on the 1400sq.meter ceiling of the French Pavilion at the International Exhibition in New York.