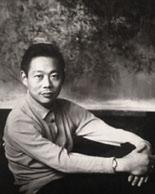 Zao Wou-Ki was an internationally celebrated exponent of the Abstraction Lyrique movement, known for his mystical, evocative abstracts. Born in 1920 in Beijing, Zao Wou-Ki studied Western painting in Hangzhou in 1935, before moving to Paris in 1948 where he spent much of his early days at the Louvre museum. He enrolled at the Académie de la Grande Chaumière studying under Othon Friesz, and took a studio in Montparnasse where his neighbour was Alberto Giacometti. During this period he also befriended Jean-Paul Riopelle, Nicolas de Staël, Pierre Soulages, Maria Elena Viera da Silva and Hans Hartung.

Wou-Ki soon became associated with the Nouvelle École de Paris. In 1948 he won an award, and in 1949 he had his first Parisian exhibition at the Greuze Gallery. In 1951 Wou-Ki began creating larger compositions with spiritual ambiances evocative of Chinese landscapes, which he showed in the first of several exhibitions at Galerie Pierre. By 1953 his work became increasingly abstracted, whilst retaining the mystical character. These beautiful ethereal works established Wou-Ki as a leading exponent of the Abstraction Lyrique movement.

In 1952 Wou-Ki exhibited in London, Washington and New York, and the Cincinnati Museum of Fine Arts presented an exhibition of his work in 1954, and in 1955 he won an award at the Carnegie Institute of Pittsburgh and participated at the Sao Paolo Biennale. In 1957 he left France for a year travelling the world, spending much time in America, and began exhibiting at Kootz Gallery. In 1961 he joins the Galerie de France in Paris, famously associated with the Abstraction Lyrique group. He went on to be exhibited extensively around the world. He had major retrospectives in 1969 at the Museum of Modern Art in Montreal, in 1981 at the Grand Palais in Paris, in 1992 at the Gulbenkian Foundation in Lisbon, in 1994 in Mexico, in 1998 in Beijing, Shanghai and Canton, in Tokyo and Paris in 2000, at the Guggenheim museum in Bilbao in 2006 and in 2018 an important show was held at the Musée d’Art Moderne in Paris.