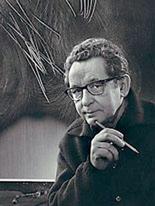 Hans Hartung was a major figure in the evolution of the Abstraction Lyrique movement, (the European equivalent of Abstract Expressionism). Born in Leipzig Germany, he studied art in Leipzig and Dresden where, although he initially took inspiration from the Old Masters, his work soon became abstract, experimenting with chance effects and sub-conscious gestures, which would place him at the forefront of  “Tachisme” and “Art Informel”. Having seen an exhibition of Cubism in Dresden in 1926, he spent much of the next few years visiting Paris.

Having married the Swedish painter Anna-Eva Bergman, with whom he spent time living in Menorca, in 1935 Hartung fled Germany permanently live in Paris. He befriended Mondrian, Kandinsky, Mirò, Calder with whom he exhibited at the Galerie Pierre, and a major show at the Musée Jeu de Paume organised by Christian Zervos in 1937. Until WWII he participated at the Surindépendants. During that time he created a series of “ink stains”, pushing the traditional boundaries of art. His work was classified as “degenerate” by the Nazi’s, and during the Occupation, he enrolled in the Foreign Legion and lost one of his legs at the Front, and later imprisoned in Spain. He was subsequently, awarded the Croix de Guerre and French citizenship.

After the war, Hans Hartung developed his distinct style of vigorous calligraphic marks made over (or into) fields of abstract colour. In 1947 he had his first solo exhibition in Paris at Galerie Conti. He had affinities with artists such as Poliakoff, Schneider, Lanskoy, Marie Raymond or Domela at the avant-garde Centre des Recherches. In 1948 he was part of the important “HWPSMTB” exhibition at the Colette Allendy’s Gallery with Wols, Picabia, Stahly, Mathieu, Tapié and Bryen. In 1948 the new gallery Des Deux-Isles presented an exhibition of Mathieu, Hartung, Ubac, Arp and Germain. In 1951 he participated in the ground-breaking exhibition “Véhémences Confrontées” curated by Michel Tapié at Galerie Nina Dausset. In 1952 and 54 he exhibited at the Venice Biennale, also in 1960 when he won the Grand Prize for Painting. In 1953 he was one of the “Young European Painters” at the Guggenheim Museum, New York.