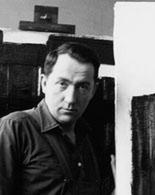 Soulages was the most highly celebrated of European post-war abstract painters. An unwavering exponent of informel Abstract Expressionism, predominantly working in black on white, his bold richly textured gestural compositions have a raw primordial resonance.

An autodidact with an abiding interest in prehistoric, Celtic and Romanesque art,  Soulages from the start of his career embraced abstraction. Demobilized from the army after the fall of France in 1940, he worked on a farm near Montpellier whilst continuing to paint.  He settled in Paris in 1946 and exhibited at the Salon des Surindependants the following year with a body of work described by Maximilien Gauthier as “an awe-inspiring symphony of dark colours." In 1948 he was invited to participate in the Salon des Réalités Nouvelles.  His work was amongst the first abstract painting exhibited since the end of Nazism in the “Franzoesische Abstrakte Malerei” (“French Abstract Painting”) exhibition in Germany.

In 1949 Soulages undertook his first solo exhibition at the Galerie Lydia Conti as well as a group show at Galerie Colette Allendy with Jean Deyrolle, Marie Raymond, Jean Leppien, and Emile Gilioli. In the 1950s his reputation achieved international stature with exhibitions in Denmark, Sweden, Italy, Germany, Japan and the United States. He spent every autumn in the United States, where he was friends with de Kooning, Rothko and Motherwell. In addition to exhibitions at numerous private galleries in America (including the “Young Painters from the U.S. and France” show organised by Sidney Janis and Leo Castelli in 1950), he exhibited in “Younger European Painters” at the Solomon R Guggenheim Museum (1953) and “The New Decade: 22 European Painters and Sculptors” at the Museum of Modern Art (1955) in New York. He was awarded prizes at the Sao Paolo Biennale (1953), the Tokyo International Exhibition, and in 1964 he won the Carnegie Prize.

The first retrospectives of Soulages’ work were held in Hannover (1960) and in Essen, The Hague and Zurich (1961); in 1962 his work was exhibited as part of the Tate’s “Ecole de Paris” show.   More recently his retrospective at the Centre Pompidou in 2009 was amongst the highest ever attended exhibition; and in 2019 a major show was held at the Louvre museum to mark his centenary.

The artist’s work is now represented in numerous museums of Modern Art worldwide; and in 2014 the Musée Soulages was opened in his home town of Rodez.