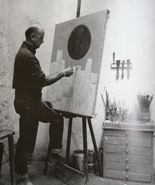 “A devotee of the Bauhaus idealism warmed by the Mediterranean” is how the critic Danièle Giraudy described Jean Leppien whose passionate dedication to the abstract art espoused in the theories of the Bauhaus  brought the artist international recognition. Having painted his first abstract work as early as 1927, Leppien attended the Bauhaus at Dessau between 1929-1930 where he studied under Kandinsky, Joseph Albers, and Paul Klee. The Bauhaus were epochal in there integration of the theories of abstract art into everyday aesthetics, and became highly influential on the future of twentieth century art and design.  From 1930 he worked in Moholy-Nagy’s studio in Berlin until 1933 when the Nazi’s came to power and prohibited the creation of abstract art, proclaiming it “Degenerate”.

Moving to Paris to continue his painting, Leppien became immersed in the Parisian artistic milieu. But with the outbreak of the war he enlisted with the Foreign Legion,  in which he was active until 1940. He then aided the Resistance fighters before being arrested and deported to Germany, where he was imprisoned for a year and a half until the Liberation in 1945. Returning to Paris he re-joined his wife, but found all his work from the Bauhaus era  had been destroyed by the Nazi’s.


Leppien painted more passionately than ever in the post-war period, never compromising his allegiance to pure abstraction. He became a close friend of other leading avant-garde painters Dewasne, Deyrolle, and Gilioli. In 1949 to 1954 he exhibited in the groundbreaking Salon de Mai, and also from 1949 in the Salon des Réalités Nouvelles, which re-launched abstract art as a major force in modern art. His work became highly respected and was championed by critics Léon Degand, Michel Seuphor, Herta Weshcer among others. He soon also attracted the attention of influential avant-garde dealers such as Colette Allendy, who already represented Schneider, Hartung, and Soulages; Denise René, who had just opened her new gallery on Rue La Boétie; and Lydia Conti. At these galleries Leppien had several one-man shows in the early post-war years,  Galerie Denise René, 1948, 1949; Galerie Lydia Conti, 1948, 1949; Galerie Colette Allendy, 1949, 1951, 1953. These high profile shows established Leppien as one of the leading abstract painters in Paris, and lead to numerous international one-man shows, notably: 1954 New York, Brussels, Milan; 1955 Buenos Aires; 1956 Zurich, Lausanne, 1964 New York; 1969 Auvernier, Neuchatel. Aswell as many major group shows, most notably, 1954 Kandinsky et Six Peintres de Paris, Sarrebruck; 1969 Bauhaus, Musée National d’Art Moderne de Paris. Towards the end of his life the artist work was celebrated in two major retrospectives: 1988 Jean Leppien 1946-1986, Galerie Franka Berndt, Paris; 1988 Jean Leppien, 40 Ans de Peinture, Musée Picasso, Antibes. Most recently major retrospectives at the Sprengel Museum Hannover in 2011, and the Hamburg Art Museum in 2013.