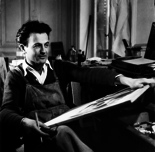 During Chapoval’s tragically brief artistic career he had already become a much celebrated exponent of post-war abstraction. Having arrived in Paris in 1924 from the Ukraine, Chapoval went on to study painting under the tuition of Fenosa and attended the Academie de la Grand Chaumière, before working at the École des Beaux-Arts in Marseille, and then at Toulouse  during the war. Returning to Paris in 1947, he held his first one man exhibition at the prestigious Galerie Jeanne Bucher, which was to establish himself as one of the most respected young painters of the new Jeune École de Paris, and was awarded the accolade of the Prix de la Jeune Peinture. His undeniable  gift, quickly gained the acclaim of several eminent  critics of the time including, Roger van Gindertael, Charles Estienne, Jacques Lassaigne, and Guy Marester. He became  a central figure amongst the circles of the  Parisian milieu, and in 1949 exhibited with the leading avant-garde group “Les Mains Éblouies” at Galerie Maeght in Paris, and was awarded the Prix Kandinsky. He also exhibited with other major groups at Galerie Denise René, Galerie Henri Bénézit, and from 1949 - 1951 participated in the important avant-garde salons, the Salon des Réalités Nouvelles, and the Salon de Mai, which presented the definitive view of leading artists and proved highly influential in the post-war development of Modern Art.

In 1951 he was commissioned to paint three large murals for the École Langevin at Suresnes in recognition by the state. But shortly after their completion later that year Chapoval was tragically found dead in his studio, the cause remains a mystery.

During what had been only a few years of mature artistic output Chapoval obtained eminent status as a painter, receiving two prestigious awards. We can only speculate what more Chapoval might have achieved had his life not been so cruelly foreshortened. In honour of this great painter his work continued to be included in major exhibitions of the post-war avant-garde, such as Les Peintres de la Nouvelle École de Paris, at Galerie de Bablylone 1952, and Permanence et Actualité de la Peinture, at Galerie R.Cazenave 1960. Later, in 1964, the Musée d’Art Moderne de la Ville de Paris held a retrospective exhibition dedicated to the artist’s work, and in 1991 a retrospective was organised by the Centre d’Art Contemporain at Villeneuve-d’Asq, which attests to the astounding impact and influence that the artist made during his all too brief career.