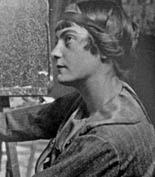 Valentine Prax was a remarkable enigmatic artist whose long distinguished career brought many international exhibitions and a major retrospective at the Musée d’Art Moderne de Paris in 1976. Of Sicilian and Catalan parenthood, Prax was brought up in Algeria before settling in Paris to dedicate herself to painting in 1919. To begin with she lived in poverty in a tiny studio without water or electricity on rue Rousselet, in Montparnasse, until the established painter Charles Dufresne discovered her and lent her his studio on the Ile St-Louis. She frequented the Dome and La Rotonde cafe’s where the great avant-garde artists congregated to discuss  ideas, and became acquainted with the sculptor Ossip Zadkine, who had emigrated to Paris from Russia in 1910, and they married the following year. She began exhibiting at the Salon des Artistes Indépendants, and in 1920 held her first exhibition at Galerie La Licorne of which the critic Maurice Girardin wrote a highly enthusiastic review. She continued to participate at Salon d’Automne, and Salon des Tuileries and with another successful exhibition in 1924 at Galerie Berthe Weill, Prax was beginning to establish a reputation for her work, which explored rural peasant life in a raw expressionistic manner.

During the 1930’s Prax held several major international exhibitions in London, Chicago, Philadelphia, Brussels; and in 1937 was commissioned to create a large ceiling design for the Musée d’Art Moderne as part of the Paris International Exhibition. But with the outbreak of war Zadkine decided to go to New York for safety, though Prax remained in Paris. During the Occupation she was forced to destroy many of their artworks to prevent the Nazi’s taking them, keeping only a few select pieces in secret. In 1942 she managed to hold a discreet exhibition at Galerie de France, but by the end of the war she was absolutely penniless, and to add to her distress Zadkine announced he was staying in New York. Prax became highly introverted and reclusive only finding solace in her painting through which she produced some of her most powerful works. Zadkine eventually returned in 1945, but in terrible health and penniless.

Prax retreated into the world of her imagination, creating images from fantasy and mythology and held several high profile exhibitions in the post-war years including Memphis, and Carnegie Institute in Philadelphia, aswell as in Paris at the Galerie du Faubourg in 1950, and Galerie André Weil in 1954. At this time she began to integrate the scenes from simple peasant life which had interested her during the 1930’s, into the new enigmatic world that she had created.

In celebration of her achievements, Prax was awarded her first retrospective in 1963 at Galerie Katia Granoff, and  others followed in Turin 1965, New York 1971, and a  major retrospective in 1976 at the Musée d’Art Moderne de la Ville de Paris.