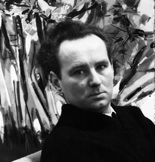 Knapp is one of the greatest post-war visionaries of the possibilities of integrating art and architecture, and became internationally renowned for his monumental projects that transformed our urban landscape into vibrant organic environments. The sheer brilliance of the colours in his work is unparalleled and the compositions resonate with a vitality that shares affinities with the American Abstract Expressionists, but Knapp’s application conveys an asserted conviction, derived from his extraordinary primal experiences, that  makes the work of this artist so exceptional.

Born in Poland in 1921, Knapp was arrested by the Russians in 1939 at the age of eighteen, and sent to a prison camp in Siberia. He was released in 1941 and then undertook an epic journey through numerous countries still at war, eventually making it to Britain, where he enrolled in the RAF and spent several years as a Spitfire pilot. The dramatic aerial perspective of the world that he experienced during this time would become highly influential in his painting. In 1947 he enrolled in London’s Central School of Arts, following which he studied at the Slade School of Art.

In 1953 Knapp discovered the remarkable luminescent qualities of jewellery enamel while attempting to fix a girlfriend’s broach that she had broken after secretly borrowing it from her father’s collection. He immediately began experimenting on sheets of copper, and before long was producing enormous panels of up to ten feet long. There was a tremendous building boom at this time both in Europe and America and Knapp envisaged buildings throughout cities being clad with vibrant enamel exteriors. In 1957 he adapted his technique to suit steel which was stronger than copper and the earliest accomplished examples of this important development were shown in an exhibition at Pierre Matisse Gallery in New York the same year. In 1958 he received his first chance to realise his dream when he was commissioned to create seventeen large murals for Heathrow Airport. Many other major commissions followed, including an enamel mural for the Seagram Building in New York, and the Alexander Corporation, New Jersey, in 1960 which was the largest mural ever created, measuring 200 x 50 feet.  Knapp created these large-scale works with the vision that they would transform the meaning of the architecture and buildings they adorned. By the 1960’s Knapp had achieved international acclaim and exhibited extensively throughout the world.