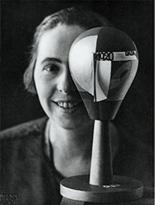 Born in Davos, Switzerland, Täuber-Arp studied in fine and applied arts in Munich before relocating to Zurich in 1914 at the outbreak of World War I. She became a pioneer of constructivist art in 1915 when she started her coloured pen drawings, gouaches and tapestries known as vertical-horizontal compositions. During this time, she also met her future husband Hans Arp and emerged as a key protagonist of the Dada movement, performing at the legendary mainstay Cabaret Voltaire amongst others.

Täuber-Arp believed in a multidisciplinary approach, from applied arts teacher, participant in the Dada movement, and maker of textiles and objects; to designer of murals, stained glass windows, furniture, interiors, and buildings; to painter-sculptor, magazine editor, dancer, and early champion of geometric abstraction.

During the Occupation the Täuber-Arps first moved to Grasse on the Côte d’Azure, where an artist community formed including Sonia Delaunay, Marie Raymond, Alberto Magnelli, and Nicolas de Stael amongst others. In 1942, they fled to Zurich where she produced many drawings, exploring the line. She also joined the Allianz group, a union of Swiss painters, amongst them Leo Leuppi, who rallied around the teachings and theories of Max Bill. Allianz also took a political stance against the Nazis, and its members produced their eponymous, self-published magazine.

Täuber-Arp’s life was tragically cut short due to carbon-monoxide poisoning whilst staying at Max Bill’s house on a cold, winter night in January 1943. Following her untimely passing, her husband Hans Arp devotedly championed his wife’s art and made sure it stayed in the public eye. In 1964, two years before his death, a retrospective of her work was held at the Musée National d’Art Moderne in Paris, and the Kunstmuseum, Saint-Gallen, Switzerland.

The artist is now represented in museums of Modern Art worldwide, as well as the Fondation Arp-Taeuber; and the Arp Museum Bahnhof Rolandseck.

A major retrospective of the artist is being held at the Kunstmuseum Basel in 2021, travelling to Tate Modern, London, and the Museum of Modern Art, New York.