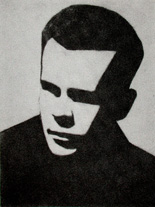 César Domela (-Nieuwenhuis) was one of the most innovative and influential artists working in Europe during the mid-twentieth century. Initially becoming a prominent member of the De Stijl group with Mondrian and van Doesburg, Domela’s approach evolved into three dimensional abstraction described as “enriched Constructivism”, of which “Méditation” is a magnificent example. Domela’s exquisitely harmonious integration of materials forms a transcendent visual polyphony. Each individual material was chosen after extensive, almost obsessive, consideration to it’s unique physical properties of colour, texture, opacity, sheen, and what musicians refer to as “timbre”, the specific resonance. Domela favoured distinctive materials such as perspex, shagreen, sharkskin, copper, thuya and palmtree wood, and colours are used sparingly so that the hues of the elements yield to the texture of the material, a technique not of neglect or concealment, but sublimation.

Born in Amsterdam, Domela started his artistic career as a painter of landscapes from the time of his father’s death when he was nineteen. Spending 1922-23 in Switzerland he started to abstract the representational element of his compositions, increasingly concerned with the opposition of lines, with vertical and horizontal planes, and above all with creating “a transcendent art.” In 1924 he participated in the radical “November Group” in Berlin. Then in Paris he became engaged with the Cubism of Henri Laurens and Georges Braque.  Domela’s first personal exhibition was held in The Hague in 1924 and, having met Mondrian and van Doesburg, became the youngest member of the “de Stijl” group.  In 1926 he exhibited with the avant-garde “Société Anonyme” in New York; and in 1927 moved to Berlin, beginning work there on the first of his “Neoplastic” creations. He became a member of the “Abstracts of Hannover” and associated with members of the Bauhaus, most notably Moholy-Nagy and Kandinsky. In 1933 Domela moved to Paris (where he settled), and became a prominent member of the “Abstraction-Creation” group, and in 1937, with Jean Arp and Sophie Tauber, began publishing the avant-garde journal “Plastica”.

After the war there was much disunity amongst the avant-garde, not only between figuration and abstraction, but also critically between “gestural” and “geometric” abstraction. Domela was a leading advocate of “geometric abstraction”, and in 1946 he founded the “Centre de Recherche” as a base for the movement, and influenced many younger painters, notably Jean Deyrolle. In 1947 he held an important exhibition at the distinguished Galerie Denise René and began to establish a high profile international reputation.  By 1954 he had a retrospective at the Museum of Modern Art, in Rio de Janeiro and a show at the Museum of Modern Art in Sao Paolo.  In 1955 he had an exhibition at the Stedelijk Museum, Amsterdam; in 1960, at the Gemeente Museum, The Hague. Numerous major museum exhibitions have since been held, including “Domela:  65 Years of Abstraction” at the Musée d’Art Moderne de Paris in 1987, and most recently at the Sprengel Museum, Hannover, 2007, and the Gemente Museum, The Hague, both in which this work was exhibited..