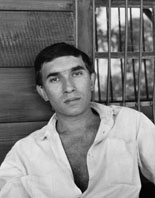 The son of immigrant parents, his father Russian, his mother Greek, Dmitrienko was brought up within a Russian culture. After studying at the Ecole des Beaux Art in Paris, from 1944-46, Dmitrienko was attracted to the Academies grouped around Montparnasse, wholly embracing the visionary character of abstraction, and frequenting the Grande Chaumière, he made his debut at the “Mains Eblouies” group at the Galerie Maeght in 1947. His success was rapid and from 1949, when he exhibited at the Hugo Gallery, in New York, he would go on to particpate in numerous exhibitions in  Zurich, Brussels, Berlin, Stochkholm, London, in the next five years alone. He had his first one-man show in 1950, at the Galerie de la Paix, and in 1953 held the first of four exhibitions at the acclaimed Galerie Luciand Durand who was central to the championing of young abstract painters in Paris; before moving to the Galerie Jaques Massol in 1958, where he had annual exhibitions until 1961.

At this time Dmitrienko liberated his formal technique from the  rigorously syntactic approach of the theoretician Albert Gleizes, and began instead to explore reality freely, without the  restrictions of analytical formulas, with a lyricism that is comparable to Paul Klee. This significant release gave expression to an intuitively poetical sensitivity in his work, derived from the mystical symbolism of his Eastern origins. In the “Compositions” of this period, Dmitrienko captures what he describes as “Présences”, inspired by his experiences, he conveys the psychological climate, or atmosphere of a place/situation. The prevalent mood of these paintings is distinctly optimistic, in contrast to the existentialist vogue of Saint-Germain-des-Pres. His strength and independence, which were so fundamental to his work, are clear in his blatant rejection of the textural primacy advocated by the prominent avant-garde artists of the time, such as Mathieu and Soulages. The “Compositions” of Dmitrienko are built up of an intricate layering of energised lineal rhythms and fluctuating colour harmonies, fluid and evanescent, suggestive of the sparkling of crystals. Through this effect he sought to embody a plastic equivalent of a sensational experience, his own poetic emotion.