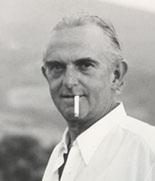 Pierre de Berroeta gained recognition during the 1960’s for his highly charged abstract compositions. Often using musical terminology in the title, like Kandinsky he drew inspiration from the abstract harmonies of music to capture the dynamism of post-war society, using the paint brush with such passion, as if it were a conductors baton, to interpret the energy into a visual manifestation.

De Berroeta was born in France and attended the École des Beaux Arts de Paris in 1933 where he studied under Dewambez and Guérin. He exhibited extensively at the major Paris Salons, where his work found an enthusiastic audience, such as the Salon d’Automne, Salon des Independants, and Salon des Comparaisons. His early work was much inspired by the Basque landscape which he frequented throughout his life, and where he would eventually buy a farmhouse. But in 1939 he was enlisted and subsequently found himself a prisoner of war in Pomerania, however the guards permitted him to draw, and he also befriended fellow artist Jean Starck. Surviving the war he moved to Buenos Aires with his wife in 1945, where the bold colours and bright light would prove influential in his work, and he held several exhibitions, including at the Wildenstein gallery in Buenos Aires (the gallery also showed his work in Paris).

Returning to Paris in 1954, finding the city still struggling to recover from the war, and his old studio derelict, it was a difficult and impoverished time for him. A fortunate encounter led to him being commissioned to create a series of impressive wall tapestries for Aubusson, which proved so successful he continued to design for them until 1975, creating over 150 designs, which can still be seen hanging in many buildings throughout France and Switzerland.

De Berroeta also continued to exhibit his paintings, which from the late 1950’s turned towards abstraction, through a poetic interpretation of nature, using a synthesis of marks, colours and textures he generated enormous energy in his compositions. The subject matter from which he drew his inspiration is, as was with many of the modernist painters, urban life, the speed, the sound, the bright lights, the energy of post war society. But at the same time there was an inherent sense of isolation, and a re-examination of spirituality occurred through abstract art. Like his contemporary Vieira da Silva, de Berroeta expressed these aspects of their existence in his work. During the 1960’s, he would exhibit regularly at the Galerie Simone Heller as well as numerous group shows, and in 1964 he contributed to the International Biennale at Menton.

The artist’s work continues to be widely exhibited, and in 2012 a retrospective was held at the Musée des Beaux Arts in Libourne; and in 2017 a substantial monograph on the artist has been published by the eminent art historian Patrick-Gilles Persin.