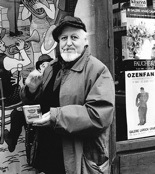 Oscar Gauthier was a prominent member of the Abstraction Lyrique group which was the European equivalent to the American Abstract Expressionists. After the second world war there was a powerful Western urge to celebrate the superiority of liberal society through it’s openness to free thought. This sentiment lead to the passionate expression of unconventional creativity and this manifested itself in visual art in the enthusiastic embracement of abstraction. This took a variety of forms of which the most famous is the approach of the Abstract Expressionist and Abstraction Lyrique artists whose highly gestural approach was acclaimed as the ultimate expression of the individual, the uninhibited self. At once dynamic and spontaneous whilst also poetic and meditative.

After attending the École des Beaux Arts de Paris and also the more avant-garde Académie de la Grande Chaumière under Othon-Friesz, where he met César and Huguette Arthur-Bertrand, Gauthier’s development was interrupted by the war, but afterwards he returned to painting and began exhibiting at the Salon des Moins de Trente Ans from 1945. He abandoned all figuration in 1948 and held his first solo exhibition in 1949 at the prestigious Galerie Colette Allendy. Here he became acquainted with leading artists Hartung Schneider, Deyrolle, and Domela and held two further solo exhibitions there in 1950 and 1951. From 1952-1958 he exhibited at the gallery of John Robert Arnaud and the young American John Franklin Koenig in the highly fashionable area of St-Germain-de-Prés. At this cutting edge gallery he also participated in the influential series of group shows known as the “Divergences” including “Nouvelle Situation” curated by R.V. Gindertael in 1954 and “Affinités” curated by Michel Ragon in 1958. During this period Gauthier’s style evolved dramatically and he began applying the pigment with the palette knife almost sculpting the surface of the painting, the critic Michel Ragon termed this style “abstract landscapism”. In 1959 Gauthier began exhibiting at the high profile Galerie Raymonde Cazenave which also exhibited Lanskoy and Bryen.