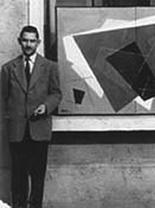 Painting under the pseudonym “Mélito”, Miot Maurice established himself in the School of Paris as a talented exponent of the Geometrical-Abstraction movement which arose in Paris after the war along with Gestural-Abstraction, in opposition to the conflicting strain of development in art towards a “Nouvelle Figuration”. Continuing in the experimental vein of the Suprematists and the Constructivists, this resurgence of geometrical-abstraction occurred with such conviction that it finally established this aesthetic at the forefront of modern art.

Mélito engaged himself in this movement from his early years of painting in Bordeaux, where he became a member of the radical Structure group, until 1955, before participating in the Espace group until 1956, and Artistes Associés until 1962. These groups were all various germinatory interactions of artists forming the establishment of a new aesthetic based on geometrical forms. But although they shared a similar motivation, it cannot be said that they all came to identical conclusions. Mélito expresses his personal aims: “Je ne suis ni pour une imitation de la nature, ni pour une figuration réaliste, ni cependant pour une abstraction totale, mais je cherche à traduire des choses sensitives”(I am not for an imitation of nature, nor for a figurative realism, nor however for a total abstraction, but I seek to interpret the sensorial process). Sharing clear affinities with Magnelli, Mélito’s work manifested itself through the absolute exteriority of the geometrical organisation, creating complex spatial compositions of ideograms, symbols, and arabesques. The present work is a superb example of Mélito’s oeuvre, clearly demonstrating his adept sensitivity to the balance and tensions created by lineal forms, even to the specific quality of the line. The apparently random arrangement of lines, conduct the energy generated by the seemingly passive underlying blocks of colour, in such a way that the entire picture space becomes highly charged.

In 2018 a major retrospective of the artist's work is being held at the Centre Culturel de Luynes.