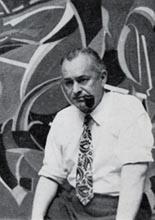 Marcel Burtin was the archetypal École de Paris artist, immersed in the painterly discourse of form and colour. His career overlapped both the eras of the early Modern Masters Picasso and Matisse, aswell as the post-war “Jeune École de Paris”. This enchanting work is a fine example of the artist’s early post-war oeuvre, for which he enjoyed international renown.

The son of a miner, Burtin had been briefly enlisted into the French Navy during the end of the First World War, before taking a studio in Paris, and initially supporting himself by working at the Renault car factory. He became a close friend of Edouard Pignon and together were associated with the "Groupe de la Jeune Peinture". He held his first major exhibition in 1945 at the prestigious Galerie Denise René, curated by André Lhote. The same year he also exhibited at Galerie Visconti, and the critic Frank Elgar wrote of Burtin as being of the most talented artists of the generation. The critic Anatole Jakovski also acclaimed Burtin’s work exhibited at the Salon des Indépendents. Burtin would exhibit regularly at the major annual salons, including the Salon d’Automne, and the Salon de Mai which was dedicated to promotion of post-war Abstraction. In 1946 Burtin exhibited at the Galerie Vendome, where a painting was bought by the Musée d’Art Moderne.

Burtin exhibited extensively internationally including in 1947 with Hartung, Singier, Le Moal, Gischia and Pignon in "Peintres d'Aujourd'hui" at Galerie Moos, Geneva; and with Picasso, Matisse, de Stael at the Waddington Gallery in Dublin; and also the Galerie Apollo in Brussels; while in Paris he held a solo show at Galerie de France. In 1948 he showed at the French-Swedish Gallery in Stockholm; and Galeria d’Arte d’Oggi in Florence; in 1949 the Musée d’État, Luxemburg; Galerie Illum, Copenhagen; and 1951 Sao Paulo. In 1952 he curated the exhibition “Transposition Poetique”, at the Palais de New York in Paris, which included work by Léger, Villon, Laurens, and Singier. In 1956, he exhibited with Picasso and Leger in Mexico. In 1957 he had a major solo show at the prestigious Galerie Charpentier in Paris. In 1958 he participated in “Les Grands et Jeunes d’Aujourd’hui” at the Musée d’Art Moderne, Paris, and again in 1960.

The artist is represented in various museums of Modern Art including the Musée d’Art Moderne in Paris.