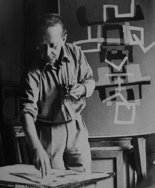 Léo Leuppi was one of the leading exponents of Art Concrete  which was a non-objective movement defined in Theo Van Doesburg’s Bauhaus manifesto of 1930 to challenge the predominant conception of Abstract Art and particularly the activities of the Cercle et Carré  group (1929-1932) and the subsequent Abstraction-Création group (1932-1937) which were highly influential in the development of abstract art in Paris. Leuppi, along with his compatriots Max Bill, Sophie Tauber and Hans Arp, had initially been involved with the Parisian groups, but in the early 1930’s changed allegiance  to join Van Doesburg’s dissident movement. Art Concrete  sought to be anti-impressionist and to achieve a utopian “perfect harmony” and “universal equilibrium”, as opposed to a singular expression. The present work, painted by Leuppi in 1934, is a magnificent early example of this important development in this revolutionary period.

Having begun his career at the Kunstgewerbeschule, Zurich from 1910-1914, Leuppi participated in the radical Dada group, before evolving towards pure abstraction and what would become Art Concrete. By the late twenties he had already begun to assert himself as the leading avant-garde artist in Switzerland along with Max Bill with whom he shared many ideas for the progression of modern art. Bill wrote “art can only exist if and because individual expression and personal invention subordinate themselves to the ordering principle of structure and derive new regularities and new creative possibilities from this ordering principle” [Struktur in Kunst].

In 1937 Leuppi founded the Die Allianz, an association of Swiss avant-garde artists, and in 1940 co-published the associated radical journal Almanach Neuer Kunst in der Schweiz. Aswell as exhibiting regularly in Switzerland and Germany, Leuppi retained his association with the Paris avant-garde and in 1952 and 1954 held major one man shows at the prestigious Galerie Denise René, which represented the elite of the Parisian abstract painters including Poliakoff, Hartung, Deyrolle and Schneider.

The artist is represented in several museums of modern art.