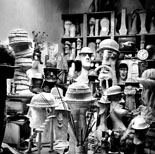 Kosta Alex established an international reputation during the post-war years through his conviction to his extraordinary idiosyncratic vision, obsessively constructing these over life-size heads from found materials in an absurdist style comparable to the bizarre ironic and satirical collages of the Italian Enrico Baj. This work “Dieu Soleil”  (Sun God) is a wonderful example, which Alex regarded as a “cherished, vital benchmark” in his oeuvre.

Born in America, Kosta’s creative endeavours soon gained him an invitation to exhibit at the Whitney Museum in 1941. During the war he enlisted and spent time in Japan, after which he enrolled in the National Sculpture Service in New York.  Here under the mentorship of Italian sculptor Hugo Ricardi, Kosta experimented with an array of different techniques and materials. In 1947, obtaining a grant from the G.I. Bill, he decided to move to Paris, where he frequented the Académie de la Grande Chaumiere, whilst also working as a carpenter to support his career as an artist. One client, Jean Planque, who became interested in Kosta’s art offered him the use of his attic which Kosta converted into a studio. Working tirelessly, Kosta began producing a remarkable body of work which he started to exhibit at the avant-garde salons such as the Salon des Comparaisons, Salon de Mai, and Salon de la Jeune Sculpture.

A regular of the legendary “Café Dome”, Kosta immersed himself in the avant-garde culture. One crackpot project with Paolo Vallorz and Yves Klein to enter a blue car into the 24 hour Le Mans race, lead to the incidental development of the now famous “Yves Klein Blue”.  In 1960, he took a larger studio on rue Raymond-Losserand near Montparnasse, and began to work in earnest, producing a powerful new body of work which attracted the attention of influential art dealer Claude Bernard, who would hold several solo shows for Kosta. Exhibitions in many high profile galleries ensued including Galerie Jeanne Bucher in Paris, Galerie Beyeler in Basel, and Lefebre Gallery in New York, and major public galleries including Musée Rodin, and the Museum of Modern Art in Paris, the Whitney Museum in New York, and he also represented France at the Tokyo Biennale in 1965.

Several visits to Geneva led him to take a small studio there near the Pastori Foundry where the present work “Dieu Soleil” had been cast, and here he would spend much of his time towards the end of his life. His work continues to be exhibited regularly throughout Europe and America, with a major retrospective in Athens in 2009.