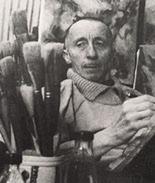 Lombard was a prominent member of the post-war School of Paris and in the late 1950’s he became fascinated with opera and music, and created a series of bold expressive works inspired by powerful musical experiences, of which the present painting “L’Orchestre” is a magnificent example, wonderfully evoking the vibrant dynamic energy of a concert orchestra in full flow. Lombard’s exuberant lyrical approach has been described as a harmonious synthesis between rigorous analysis and ethereal fantasy.

Born in Dijon, Lombard studied at the École des Beaux-Arts in Lyon and frequented the studios of Auguste Morisot and Charles Repelin.  In 1918 he went to Paris, where he enrolled in the École Nationale Superieure des Beaux-Arts.  He spent much time studying the Old Masters such as Titian, Tintoretto, and Rubens, in the museums.  Meanwhile he was also inspired by the possibilities opened up by Van Gogh, Bonnard, Matisse and Cezanne.  In 1921 he made his debut at the Salon des Indépendants and, a year later, at the Salon d’Automne (where he was to exhibit until 1939); in 1925 he started showing at the Salon des Tuileries.  His first solo exhibition took place at the Galerie d’Art Contemporain in 1928 with a show of figurative work.  Subsequent shows at the Galerie Druet, 1932, 35 and 38, defined Lombard’s “periode Cezanienne.”

Remaining in Paris during the Occupation, Lombard set up an artist’s group in the rue du Vert-Bois the “Atelier du Vert-Bois” in 1942, a sort of free academy, which gave birth to the “Groupe du Vert-Bois”, with Jean Bazaine, Léon Zack, and Felix Aublet. He continued to exhibit with shows at  Galerie de Berri, 1941, Galerie d’Anjou, 1943 and Galerie Bourdon, 1947. After 1945 his work became increasingly abstract and expressive, as he strove to capture abstraction within nature, assiduously observing such subjects as knotty, gnarled trunks and local pines and olive trees, in Aix-en-Provence. In 1955 he was awarded the Prix Lissone in Milan, and embarked on his acclaimed “série musique” to which the present work belongs. He continued to exhibit extensively with shows at Galerie la Gentilhommiere, 1954; Galerie le Cercle, 1957; Galerie Synthése, 1958, 60, 62, 64, 67;  Galerie Ronca, Lucerne, 1961; Galerie Pierre Loeb, Paris, 1962; Institute Francais, Cologne, 1962.

Throughout his career Lombard also participated in numerous group shows including:  Galerie Moderne Hassel Backen, Stockolm, 1947; “Jeune Peinture Française”, Germany, 1950; “New International Painting”, Tokyo, 1955; “Sélection Comparaisons”, Mexico, 1959;  “Les Contemporains”, Musée de Reims, 1960; “Synthése”, Musée de Nantes, 1960; “Ecole de Paris”, Tokyo and Kyoto, 1960. He also participated in the avant-garde salons such as the Salon de Mai with regularity from 1949 onwards, and the Réalités Nouvelles from 1956 – 58.  Major retrospectives of his work have been held in 1975 at the Musée d’Ingres, and more recently in 1990 at the Galerie Etienne de Causans, Paris.

The artist is now represented in several major museums including the Musée National d’Art Moderne, Paris; and the Stedelijk Museum, Amsterdam.