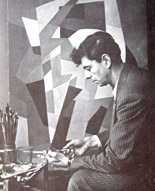 Jean Deyrolle was one of the most highly celebrated abstract painters of the post-war School of Paris. As part of an elite group of artists associated with the pioneering Galerie Denise René, that included Poliakoff, Hartung, Dewasne and Schneider, they formed the driving force of European abstract painting in the post-war era. Their famous weekly meetings at Atlan’s studio on rue Daguerre with other leading abstract artists, including Jean Leppien and Marie Raymond, produced some of the most radical and progressive art to emerge for a generation. Deyrolle was active aswell in another avant-garde group founded by César Domela at the Centre de Recherche  at 15 rue Cujas which was also very influential in promoting abstract art.

Having studied at the École de Paris in 1928, the critic Charles Estienne introduced him to the writings of Paul Sérusier, which had a profound influence on him, and hence his early work shows a clear Nabis  influence. After the Liberation Deyrolle returned to Paris where in the company of de Stael, Magnelli, and Lanskoy he began to experiment with abstraction. He exhibited his first abstract works at the Salon d’Automne de la Liberation in 1944, and was championed by the dealer Jeanne Bucher and the critic Wilhelm Uhde, who would also become one of his most important patrons. At this time he also began exhibiting at the avant-garde Salon de Mai and the Salon des Réalités Nouvelles. In 1946 he joined the aforementioned Galerie Denise René, where he held his first one-man show of abstract work in 1948, and subsequently 1951, 1953 and a major retrospective in 1966. He also held notable one-man shows at Galerie La Boétie in 1951, 1953, 1954.


The years 1949-1953 were Deyrolle’s Purist period, during which he made the decisive transgression from conventional oil paint to Tempera, a medium more usually associated with Renaissance frescoes. His attraction to Tempera was the unique translucent luminosity of the pigment, which Deyrolle exploited to brilliant effect to emphasise the elaborate interchange of positive and negative forms that co-exist in absolute unity within his compositions.


During his career Deyrolle became recognised as one of the greatest painters of his time and received several major awards including the prestigious Prix Kandinsky. Before his death in 1967 Deyrolle’s final accomplishment, despite his deteriorating health, was to complete a book project in collaboration with Samuel Beckett titled Séjour, (published in 1969). Many retrospectives have since celebrated Deyrolle’s remarkable career, most notably at the Musée d’Art Moderne de la Ville de Paris, in 1975.