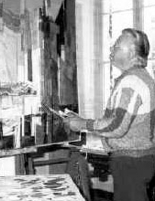 Convinced that painting is “the reflecting of the universal aspect of reality”, Chevolleau’s goal was to reach that summit of balance which is the meeting point between intellectual experience and the unfolding of the senses, and capture the ephemeral existence of the moment.

Having studied under Jean Souverbie at the École des Beaux Arts de Paris, 1946-1949, and also attending the Académie Grande Chaumière, under Othon Friesz, Chevolleau befriended the ageing artist Jacques Villon, and in 1951 joined a group of young avant-garde artists known as the École de Puteaux on the outskirts of Paris, which at that time included Lhote, Pignon, and Manessier. He began to exhibit his work at the major salons such as the Salon d’Automne, the Salon des Independants, and the Salon Comparaisons. Here his talents attracted the attention of a wealthy art collector Camille Renault, who bought several works from the artist and in 1950 provided him with his first one-man show at his Parisian restaurant, the preface to the exhibition catalogue was written by Gilbert Prouteau. Chevolleau went on to hold several more shows at the venue before making his international debut in 1954 at the Watson Gallery in Montreal, Canada.

Aswell as exhibiting extensively in Paris over the next few years, including at Camille Renault’s modern art gallery on Boulevard Hauseman which he opened in 1957, the artist held further high profile one-man shows at Gallery Bowink, Los Angeles, USA, in 1957; and Gallery F Partridge, New York, USA in 1965. Establishing an international reputation, Chevolleau also received numerous prizes for his exalted quest for modernity including the Prix du Palais Royale, 1956; Prix International  du Gemmail, 1960; and was awarded a Professorship from the École Nationale Supérieure des Beaux Arts de Paris.