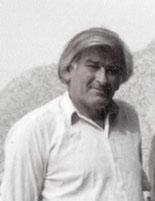 Janos Stryk was a Hungarian sculptor, who divided time between Britain and Italy where he built a house in the hills near Carrara famous for its marble, and started his own quarry becoming an inspiration to many sculptors. He worked in stone, marble and wood, seeking particularly to exploit the natural effects of his materials. This beautiful large yet subtle organic carving is characteristic of the tendency in Stryk’s work to allow the inherent curvature of the marble to yield powerful abstract rhythms. The carving is used to reveal the impulses of both the marble and Stryk’s imaginative drive expressing the primal essence of mankind and nature.

Born at Godreszentmarton in Hungary, Stryk’s father was a Baltic nobleman from what is now Estonia, and his mother a Dutch aristocrat whose aunt, Maria Vetsera, had died with Crown Prince Rudolph of Austria-Hungary at Mayerling in 1889. At the time of the Russian Revolution, Stryk's family was forced to leave Russia and they eventually settled in Hungary. However, the wartime occupation of the country by the Soviet Union brought more troubles for the family, many of whom were imprisoned by the Communists. After the war, Stryk was able to begin his artistic training at the Budapest College of Art, but he was soon conscripted into the Hungarian army. In 1956, when Hungary rose in revolt against the Soviets, Stryk joined the fight before leaving for England, where he resumed his studies at Kingston College of Art. By the 1960s he was exhibiting his work at the Marjorie Parr, Brook Street, Circle and Obelisk galleries. In 1968, he and his wife, the painter Charmian Loring, moved to Carrara in Italy.

Stryk’s work has been the subject of numerous one-man exhibitions in London, Milan, Florence and Ravenna, and graces many private collections in London, Milan and New York. In 1973 he was given a show at the prestigious Galleria D’Arte Moderna in Florence. Among his most important commissions was the design for the gates of the Legnano town cemetery in northern Italy, and a vast abstract piece he designed for a park at Jeddah, Saudi Arabia. His work was regularly displayed at the Museo d'Arte Moderno at Legnano, and many of his best pieces are in the permanent collection of Enzo Pagani. Stryk also carried out work at El Prat de Llobregat, near Barcelona, and at Ostend. He won many prizes for his work, including the first prize for sculpture at the Brunelleschi International Exhibition at Florence in 1976. He also took first prize at the International Symposium on Sculpture at Carrara in 1979, and first prize at the International Symposium on Sculpture at Digne-les-Bains in 1987.