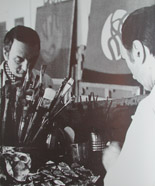 Whilst visiting America to organise an exhibition Pichette was much impressed by the energy of Jazz music which seemed to achieve that euphoric state which he had been seeking to evoke through his painting. The abstract rhythmic compositions of jazz music generated a vivacity which Pichette sought to emulate and even surpass in his paintings, to achieve a harmonious sensational experience. Pichette was impassioned by the energy of light and colour, often referring to it as his drug: “j’aime la couleur, le soleil: c’est ma drogue”.

Having initially studied in Marseille, Pichette had begun designing sets and costumes for his brother Henri Pichette’s theatre productions, at which he displayed a noticeable flair for original and innovative creativity. With the outbreak of the war in 1939, he enlisted with a cavalry regiment and was awarded the Croix de Guerre, but was hospitalised for two years. He used this time to read extensively, choosing philosophical authors such as Gide, Léon Bloy, and Huysmans. On his release in 1943, he joined the underground resistance movement, and helped liberate Chateauroux. His strong disinclination to submit to oppression was deeply ingrained, and is to an extent reflected in his painting in which he rejected formal conventions in favour of absolute expression. He would later actively demonstrate against such political atrocities as the Vietnam War, the Soviet occupation of Prague, and the Chilean dictatorship.

After the war Pichette settled in Paris, attracted to the avant-garde activities of the artistic milieu. His work at this time was semi-figurative with a surrealist element, but over the next few years his work became significantly more abstract, and he held his first exhibition of pure abstract paintings in 1949 at Galerie Paul Morihien. The following year he participated for the first time in the Salon des Réalités Nouvelles, where he showed several large canvases which had affinities with the work of Magnelli. In 1952 he was invited to exhibit in the exclusive annual École de Paris exhibition held at Galerie Charpentier. At this time Pichette joined the faction of young avant-garde artists being promoted by Charles Estienne, and together they held an important exhibition titled Peintres de la Nouvelle École de Paris at the Galerie du Théâtre de Babylon, in which Pichette participated alongside other insurgent artists such as Atlan, Dmitrienko, and Nejad. In 1953 they controversially founded the Salon d’Octobre in opposition to the Salon de Mai, which as the established venue for avant-garde artists was, they declared, becoming too institutionalised.