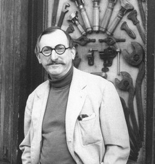 The critic Waldemar George considered Lagrange as comparable only to Matisse in his magical use of colour. In 1954 Lagrange  had set up a studio near the Botanical gardens at Antibes, and during this period his use of colour became  furthermore intensified, gaining the artist a reputation as the “architect  of light”, and receiving international  acclaim, his work having already  been acquired by several modern art museums.

Jacques Lagrange had developed his passion for painting at an early age, the son of an architect, and nephew of a painter. In 1933 he attended the École Nationale Superieure des Arts Decoratifs, and the following year transferred to the École des Beaux Arts, where he studied under Fernand Sabate and Lucien Penar. Working from the attic in his family home which Lagrange had converted into a studio, he exhibited his first works in 1936 at the Salon des Tuileries. In 1938 he won the painting prize at the École des Beaux Arts. But the war interrupted Lagrange’s  success when he was conscripted and subsequently taken prisoner in Silesia, however, he endeavoured to  continue painting and drawing despite  repeated confiscation of  his work.

Returning to Arcueil in 1944 Lagrange once again immersed himself in painting, his inspiration incorporated various techniques from the formal two-dimensional compositions of Leger; to the dynamic lyrical colour of the Fauves, and the abstract geometry of the Cubists. He devised his own painterly language, and refusing to be confined to any one style he created the “séries” which were to characterize his artistic development. During this time he exhibited at the Galerie Jeanne Castel with Vincent Guignebert, and in 1946 he exhibited in London at the Anglo-French Centre, and was invited to participate in the Salon de Mai at the Galerie Lafayette, where his work “Personnage aux Deux Lampes” was bought by an american museum. He also became a member of the avant-garde group the Jeune Peinture Française which showed at the Galerie de France, it was here that Lagrange established significant friendships with Gischia, Singier, and Pignon who invited him to Ostend, where he found a new sensitivity to light and commenced a new phase in his work. Using light alone to convey aspects of space, form, and colour, Lagrange committed himself ever more passionately to this new elaborate and vibrant art. He held numerous exhibitions, and in 1948 at his first solo show at the Galerie de France his work was purchased by the Musée d’Art Moderne, Paris.

Lagrange exhibited extensively both in France and internationally, notably: Philadelphia, 1951; Sao Paulo Biennale, 1951; Venice Biennale, 1952; Milan Triennial, 1953; Italy, 1955; San Francisco Museum of Modern Art, 1956; Vienna, 1960; and participated regularly at the Salon de Mai, from 1946; and in the important École de Paris  exhibitions held at the Galerie Charpentier, 1954-58, 60, 61. During his career Lagrange also acted as artistic advisor to the film director Jacques Tati, and regularly designed sets for Jean Vilars’s avant-garde theatrical performances. From 1971-83 he was Professor of painting at the École des Beaux Arts, Paris.