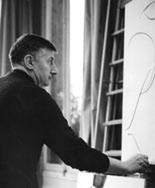 Jacques Busse became famous during the 1950’s for his highly architectural Post-Cubist compositions of which this work from 1953 is a magnificent example. The enduring characteristic in his work is a sense of rhythmic construction that plays on the equilibrium between form and light. He was greatly inspired by the French eighteenth century champion of Neo-Classical architecture Claude-Nicolas Ledoux.

Born in Paris, Busse studied at the distinguished Académie de la Grande Chaumière in 1942. Already by 1943 his work was shown in the avant-garde salons: Salon des Moins de Trente Ans, the Salon des Tuileries, the Indépendents and d’Automne. He also became a member of the group “L’Echelle” formed in the studio of Othon Friesz with Calmettes, Cortot and Patrix, and in 1943 the group exhibited at Galerie J. Blot curated by the famous critic André Salmon. During the war he spent time in captivity, but after the Liberation he became a co-founder of the Salon de Mai in 1945, and also participated in the Salon des Réalites Nouvelles.


The artist’s work is represented in several major museums including the Museée National d’Art Moderne, Paris, as well as the museums of Grenoble, Marseilles and Nantes, and worldwide.