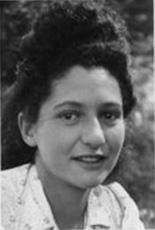 Pavlowsky’s oeuvre is considered a powerful and significant expression of the post-war period, despite her relatively short career. Having initially studied chemistry, she began to paint in her early thirties and from the start, her approach to painting was unique, she treated the canvas almost as if the material were skin, often applying the paint using bamboo sticks, and padding the surface with cotton, in a cathartic process of expression. In the catalogue for the “Abstractions 1955–1968”, Françoise Monnin recognises Pavlowsky’s “desire to leave only a trace”, hence her canvases sometimes appear more scraped and scratched rather than painted. During the post-war years, the existentialism of Sartre and Merleau-Ponty was prevalent, and in the words of the writer André Malraux, Pavlowsky etches “hieroglyphs of anguish”, like other artists of the time such as Jean Fautrier and Alberto Giacometti, torn between the joy of survival and the grief for those lost.

Born to Russian parents in 1921 in Vincennes, a commune in the eastern suburbs of Paris, Jacqueline Pavlowsky’s life was overshadowed by the war, losing both her brother and father, and considering herself as a lucky survivor, Pavlowsky’s work expresses her personal, direct experience, if indeed this can ever be fully communicated. She began exhibiting at the avant-garde salons, the Salon des Comparaisons and the Salon des Réalités Nouvelles, and was soon exhibiting regularly, including in 1957 at the Galerie Rive Droite and Galerie Legendre; in 1958 at Galerie La Roue and Galerie Lucien Durand, as well as “Peintres d’Aujourd’hui”, Senlis, and “Art Sacré” at the Musée d’Art Moderne; 1959 Galerie La Roue; Galerie Riquelme; 1960, “Aspects de l’art Contemporain”, Caen; 1961, Galerie K113, Frankfurt, Galerie Horn, Luxemburg; 1962, Musée Dunkerque, Galerie La Citadella, Ascona, Switz.; 1963, Musée de Reims, Musée d’Anvers, Galerie Saint Laurent, Brussels; 1964, Galerie Riquelme, Galerie Horn, Lux.; 1965, Galerie St Laurent du Pont, Grenoble; 1966, Galerie Nora, Jerusalem; 1970, Galerie Yellow, Brussels. Amongst other exhibitions, a retrospective held at Galerie 53 in Paris during 2011 has sought to highlight the significance of Pavlowsky’s life and work.

In the 1950’s Pavlowsky had met Russian abstract painter Serge Poliakoff in a café in Pigalle where he played his guitar, and discovering they lived near each other, him on rue de Seine and her rue Madame in St Germain on the left bank, they struck up a close friendship and regularly played music together until his death in 1965. From the 60’s onwards, Pavlowsky chose to sign herself as “Vladimir” as opposed to “Jacqueline”, and re-signed earlier works too. Her pictures, marked by the use of a male pseudonym, speak to us a thousand words on the difficulty of breaking through as a woman artist at that time.