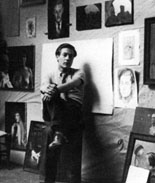 This magnificent work was commissioned from Henri Goetz by Camille Renault who was a wealthy patron and owned a gallery on Boulevard Hausman, in Paris, as well as a restaurant in Puteaux on the outskirts of Paris, where Goetz associated with a group of avant-garde artists known as the École de Puteaux, and included artists such as Reynold Arnould, Marie Raymond, Christine Boumeester, André Lhote, and Jacques Villon. In 1950’s Renault commissioned each of these artists to paint a composition in this wide format, incorporating an equine theme, for his stud-farm in Normandy, hence the inspiration for the present work.

Henri Goetz was born in 1909 in New York, his family of French and American origin. He studied at Harvard University and the Grand Central Art School before moving to Paris in 1930 where he continued his studies at the Académies Julian and Ozenfant in Montparnasse. After a brief return to the US in the early 1930’s he settled permanently in France, taking a Parisian studio next to Victor Brauner. With Brauner Goetz became involved with the Surrealist group and was soon a highly accomplished exponent. 1935 would be a year of major importance for Goetz: he exhibited for the first time at the Salon des Surindépendants, he married the Dutch painter Christine Boumeester and he met Hans Hartung, who would become a close lifelong friend. In 1937 Goetz held his first solo show at Galerie Van Leer, Paris. During the war, having neglected to become naturalized french citizens, Goetz and Boumeester became illegal aliens and both worked in the resistance movement. They were nearly captured in 1942 and forced to flee to the south of France which had already become something of a colony for displaced artists, and remarkably resilient creative spirits.

In 1965 Goetz furthermore founded his own art academy in André Lhote’s old building; and in 1967 was awarded the Chevalier des Arts. His work can now be found in numerous museums and institutions throughout the world including the Musée National d’Art Moderne, Centre Georges Pompidou, Paris, which holds a considerable collection; as does the Musée Goetz-Boumeester, Villefranche-sur-Mer, founded in 1983; others include San Francisco Museum of Art; National Art Foundation, Illinois; Phoenix Art Museum; San Diego Museum; Museum of New Mexico, Santa Fé; Museum of Budapest; Jerusalem Museum.