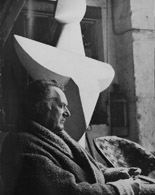 Henri-Georges Adam was a highly acclaimed French sculptor who set himself the challenge of integrating architecture and sculpture resulting in a series of vast “Habitable-Sculptures”, which were exhibited at the Paris Biennale in 1961, and drew inspiration from Le Corbusier and the “Ronchamp Chapel”. This powerful work “La Pointe Saint Mathieu”, which refers to the westernmost tip of Brittany famously exposed to the vastness of the Atlantic, was created in 1960 during the same period, and the inherent sense of monumentality of Adam’s work at this time is clearly evident in this magical sculpture. As the work balances on its base in dynamic equilibrium, the tension of the semi-geometric forms slices through the air, evocative of a flight through the immensity of the sky.

Time spent on the coast of Brittany brought Adam back to the sea, the poetry of the ocean and natural elements. This spirit animates his work in an alternation of abstract and realistic forms with an elemental cohesive force that, with the unity of its style, gives the work the appearance of nature itself. The force of the earth expressed in a measure at once abstract and sensual.

The son of a jeweller, Adam practiced the Goldsmith’s art in his early youth, before devoting himself to the patient task of engraving at which he excelled, due to his exceptional sense of contrast. But he was soon struck with a desire for greater fulfilment, and turning his attention to sculpture, he embarked on a series of ambitious projects on a monumental scale.

Establishing himself amongst the foremost sculptors of his time, Adam exhibited with Picasso at the Salon de la Libération, following which, Picasso offered him a studio where Adam worked from 1944 until 1950. He exhibited internationally with the elite of the Paris avant-garde, and was a founder of the acclaimed Salon de Mai in 1945. Adam was appointed professor at the École Nationale Supérieure des Beaux-Arts, where he emphasised collective collaboration in works on a grand scale. It was his ideal to repeat the miracle of the building of the Romanesque cathedrals. This vastness of the artist’s conceptions, by virtue of the simplicity of his origins, his complex artistic development, and the serious study devoted to it, has an almost Renaissance feeling and character.