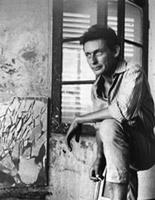 Bolin was widely celebrated for his ethereal landscapes inspired abstraction. Born in Stockholm in 1920 into a distinguished family of goldsmiths, suppliers to the Tsars and the Swedish Royal Family for three generations, Gustav Bolin was taken to Paris at the age of one; and he would live in France for the rest of his life. In 1938 he started working in the studio of Othon Friesz, and true to his naturalistic impulses, during a sojourn in Copenhagen in 1940 he created a series of portraits, a theme which he continued upon his return to Paris. But having settled in Maine-et-Loire during the War, he turned to painting the landscape and local scenes of everyday life. At this time he met Tal Coat, Giacometti, Lhote and the Swiss painter Charles Rollier. He also became inspired by Matisse, whose use of colour Bolin particularly admired. For the rest of his life the landscape of the Midi, and Cote d’Azur would become his obsession, and the subject of his enchanting abstract expression for which he became widely acclaimed.

Bolin’s first solo exhibition was at the Galerie Pierre Loeb, Paris, in 1948.  He subsequently showed at the Galerie Art Vivant in 1950, ’54, ’55, ’57, in the distinguished company of de Stael, Miro, Germain, Lanskoy and his old friend Tal Coat. Having participated in the contemporary Salon de Mai shows of 1947–1949, he exhibited there every year from 1957–1965; as well as participating in the avant-garde Salon des Réalités Nouvelles. In 1960, ’61 and ’63 he was invited by the Galerie Charpentier to participate in the “Ecole de Paris” exhibitions; and at Galerie Kriegel 1962, ’63, ’65, ‘69.   In 1963, ’67 and ’68 he exhibited at the David Findley Gallery in New York and further international exposure took place with shows at the Nichido Gallery in Tokyo, 1964, ’68 and ’69, this last coinciding with the Biennale of Tokyo.  In 1973 he exhibited at the Musée Galliera. Over the following decades he continued to exhibit widely including a number of exhibitions in his native Sweden, notably at the International Art Expo, Stockholm, from 1981.

The artist’s work is now represented in the Musée d’Art Moderne Ville de Paris, the Museum of Luxembourg, the Swedish Embassy (Paris) and the Direction des Arts et des Lettres.