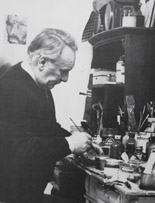 Georges Collignon was a member of the radical COBRA group during the 1950’s and a leading Belgian abstract painter of the post-war era. Born in 1923 at Flémalle-Haute he attended the Academie des Beaux-Arts in Liége and by 1947, he was already establishing a reputation. His early work was figurative with a surrealist tendency, and this fascination with the surreal-subconscious would develop into the abstract mysticism of the COBRA movement, through which Collignon found international acclaim.

Having already held substantial exhibitions in Liège, Brussels, The Hague, and Stockholm, Collignon arrived in Paris in 1949 and lived there until 1969. In 1950 at the age of 27, he obtained alongside Alechinsky the prestigious award, Prix de la Jeune Peinture Belge. The same year he exhibited in Les Mains Eblouiés at Galerie Maeght in Paris, which formed a group of radical young artists represented by Alechinsky, Corneille, and Doucet who shared Collignon’s ideals. They became know as the COBRA group, (COpenhagen, BRussels, Amsterdam), which was a reactionary movement seeking free expression of the unconscious unimpeded by the intellect. Collignon considered himself originally to be part of a group known as Réalité, independent of COBRA, but with similar motives, and later, by solidarity with Pol Bury they created a new group Réalité-COBRA. He held his first COBRA exhibition at the Librairie 73, Boulevard Saint-Michel in Paris, organised by Michel Ragon.  In 1951, five of his works were exhibited at the International COBRA Exhibition in Liége, including the present work “Vives Controverses”.

In 1952, Collignon was awarded the Prix Héléne Jacques in Paris, and during the next few years he received the Prix Lissone, the Prix Marzotto, and an award from the Guggenheim Foundation in 1960. In 1975, he was elected a member of L’Academie Royal des Sciences, des Lettres et des Beaux-Arts de Belgique.