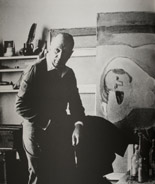 Francisco Borès was one of the leading Spanish modern artists of the early twentieth century. Associated with the School of Paris Borès helped to break down the constraints of conventional figuration, and this magnificent work “Nu Couché” is a major example from the pinnacle of the artist’s oeuvre. Having been born in Madrid in 1898, Borès initially studied engineering and law before attending the Cecilio Pla art school, and discovering the Spanish masters at the Prado Museum. In 1922 he had his work accepted to exhibit at the Madrid Salon. The following year he became involved with the “Ultraist” group of artists and poets including Juan Ramon Jimenez, Guillermo de Torre, Jose Ortega, Salvador Dali, Ismael de la Serna, who would gather at coffee houses such as the Gijón and Pombo. He would regularly contribute to the avant-garde journals such as Alfar, Horizonte, Plural, Proa, Sí, Tobogán, and Revista de Occidente.

In 1926 Borès moved to Paris where he took a studio on avenue du Maine, in Montparnasse, and befriended Picasso, Gris, Derain, and Matisse. He also attracted the attention of the famous gallerist Leonce Rosenberg. In 1928 he participated in a group exhibition at the Valentine Gallery in New York along with André Beaudin. He also exhibited at the Salon des Tuileries and at the first Salon des Vrais Indépendants, and in 1929 the Salon des Surindépendents. He married Raia Perewozska in 1930, and over the next few years became established as a prominent figure of the Paris art world. He was taken on by the famous art dealer Daniel Kahnweiler, and exhibited extensively around the world, including a joint show with Miro and Picasso at Zwemmer Gallery in London in 1938. During the Nazi Occupation of Paris during World War Two Borès took his family back to Spain before returning to stay with his friend Henri Matisse at St-Jean-de-Luz. During this period he participated in two seditious exhibitions in Paris, in protest of the Nazi’s denigration of abstract art as “Degenerate”. The first, organised by Jean Bazaine and André Lejard at Galerie Braun in 1942, was “Peintres de la Tradition Française”. The second, “Cinq Peintres D’Aujourd’hui”, was in 1943 at Galerie de France. After the Liberation Borès participated in “Art et Resistance” at the Musée d’Art Moderne, and joined the legendary Galerie Louis Carré with Europe’s leading artists. In 1948, the year of the present work, the Museum of Modern Art New York acquired another of his works for it’s collection. He continued to exhibit and enjoy international acclaim throughout his career, and in 1966 he was awarded the “Officier des Ordre des Arts”. Since his death in 1972, regular retrospectives continue to celebrate his richly expressive oeuvre.