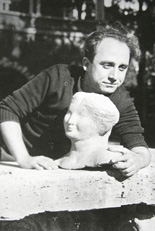 One of the key figures of post-war Italian art, Emilio Greco (1913-1995) was born in Catania, Sicily, where he was apprenticed at an early age to a stone mason and sculptor of funerary monuments and in 1934 studied at the Academy of Art in Palermo. Strongly influenced by Etruscan, Greek and Roman art, Greco is best known for his powerful classicised portrait busts and sensual nudes. Settling in Rome in 1943 Greco had his first one-man exhibition at the Galleria Il Cortile in 1946. In 1947 he took a studio in Villa Massimo, together with artists such as Leoncillo, Guttuso and Mazzacurati. In 1948 he participated in the "Olympics Exhibition" in London at the Victoria and Albert Museum, and his “Wrestler” was in the "Exhibition on Sport" at the Tate Gallery. In 1949 he was invited to the exhibit in "Italian Twentieth-century Art" at the Museum of Modern Art in New York. In the same period the Tate Gallery in London acquired his “Seated Figure”.

Establishing an international reputation, Greco went on to exhibit extensively and also received important religious commissions during his career. These included a monument for St Peter’s in Rome commemorating Pope John XXIII (1965–67), and the monumental doors for Orvieto Cathedral (1962–64) that reveal debts to Renaissance masters such as Donatello in their subtle bas-relief modelling. Greco was also appointed professor of sculpture at the Licevo Artistico, Rome, 1948-52, at the Carrara Academy 1952-5, the Naples Academy 1955-67 and from 1966 at the Academy in Rome. He was also known for his  writing and poetry: Poesie of 1951, L'oro antico delle vigne of 1978, Memoria dell'estate of 1980, Appunti di una vita of 1980 and Dell'antica voce of 1985.

Notable awards and exhibitions include: 1950 Munich; 1951 Rome "Quadriennale" and Galleria d'Arte Moderna, Rome; 1953 Bordeaux "Quadriennale", and a one-man show at the Palazzo Strozzi, Florence. That same year Greco won the competition for the "Monument to Pinocchio". 1954, Rhode Island, and Rotterdam; 1955 London, Venice, St. Louis; 1956 he won the "Gran Premio della Scultura" prize at the Venice Biennale.  1957 Museu de Arte Moderna de São Paulo in Brazil, and Dubrovnik and New York in the group show "Italy the new vision". 1958 one-man show in Palazzo Barberini, and "Ten contemporary Italian Sculptors" in Houston, Texas, and at the "World Fair" in Brussels. 1959 he had a one-man show at the Stadtische Galerie in Munich, also at Roland, Browse & Delbanco in London, and group show at the Tate Gallery, also in Venice with a one-man show at Cà Pesaro. 1960 Musée Rodin, Paris, and in Berlin. Between 1960 and 1961 Greco was at work on the bas reliefs for the church of San Giovanni Battista in Florence by the architect Giovanni Michelucci. That same year he received the "Medaglia d'oro del Presidente della Repubblica per i benemeriti della Cultura e dell'Arte". In 1961 the Musée Rodin in Paris, and a one-man show at the Shirokjia Foundation in Tokyo; 1962 Musée d'Art Moderne, Paris; 1963 Fondaçao Calouste Goubelkian, Lisbon, and Palazzo delle Esposizioni, Rome; 1965 "XXIV Biennale Nazionale d'Arte"  Milan; 1966 National Gallery of Victoria Melbourne and National Gallery of South Australia. 1967 "Artists for Florence", Palazzo Vecchio;1969 Galleria Pananti, Florence; 1970 Palazzo dei Diamanti, Ferrara; 1971 a one-man show at the "Italienische Kulterinstitut" in Vienna, repeated at the Musée Rodin in Paris.1972 Gendai Chokokusenta in Osaka, then to the Modern Art Museums of Kobe, to Yamaguchi, Hiroshima, Kyoto and Mitsukoshi. In 1974 a Greco Garden, dedicated to his works, was opened at the Open Air Museum, Hakone, Japan. 1977 Innsbruck, then Jakarta, Indonesia. 1979 Pushkin Museum, Moscow and the Hermitage in Leningrad, to which he donated a group of works. 1980 Palazzo Soliano, Orvieto; 1981 Perugia; 1983 Castel Sant'Angelo, Rome; 1984 Galleria Nazionale d'Arte Moderna, Rome; 1986 Palazzo della Ragione, Padua. Most recently, to celebrate the centenary of the artist’s birth, a retrospective was held at the Estorick Museum in London, in which this work was exhibited.

In 1991 the Museo Emilio Greco was inaugurated in Orvieto at the Palazzo Soliano. It contains his principal works: twenty-six sculptures from 1947 to 1983, and sixty prints and drawings from 1946 to 1991, as well as medals and bas reliefs. Since July of 1992 the Museo Nazionale d'Abruzzo of L'Aquila has a room dedicated to Greco with sculpture in bronze and terracotta.  A major work, “Nereid”, is also on permanent public display in Carlos Place, Mayfair, London.