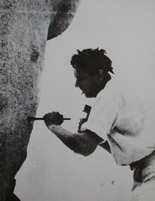 An Italian born in Paris, Emile Gilioli was one of the pre-eminent sculptors of the post-war Ecole de Paris. This magnificent work “Paquier” is amongst the artist’s most famous works, it has been extensively exhibited and documented. It was originally inspired by a curious roman chapel dating from the 12th century in the town of Paquier in the Dauphine region at the foot of the Alps. Gilioli was entranced by the building and would spend hours contemplating the irregular lines and asymmetrical forms. He considered the beauty of the perpetually shifting proportions and volumes to encapsulate an eternal rhythm and through contemplation a means of transcending to the spiritual realm. In accord with the artist's wishes, he now lies at rest in the cemetery of the chapel. For Gilioli, the challenge of sculpture was a fusion of art and architecture and the choice of material was paramount in determining the form of the object. During his career he sculpted in a wide range of materials, including granite, marble, crystal, onyx, agate, lapis-lazuli, porphyry, alabaster and cement.

After a childhood in Italy during the Great War, in 1929 Gilioli began taking evening classes at the Ecole des Arts Decoratifs in Nice and worked under the sculptor Chiavacci.  Having finished his military service in Paris in 1931 he entered the Ecole des Beaux-Arts, where he was a pupil of Jean Bouche.  Here he discovered Brancusi, Picasso, Duchamp-Villon and Laurens,  and equally developed a fascination with Pre-Colombian, Coptic, and Classical aesthetics. In 1933 he took a studio at 55 rue de Seine, before moving to rue du Moulin de Beurre in 1935.

In 1941 he held his first solo exhibition at Galerie Laforge in Grenoble, and a second the following year at Galerie Reppilin-Perriot. Then in 1946 after the Liberation he held his first exhibition in Paris at Galerie Breteau which lead to him being taken on by the high profile Galerie Denise René. Here he associated with leading avant-garde artists Poliakoff, Vasarely, Deyrolle and Dewasne, and also exhibited with Arp, Giacometti, Laurens and Picasso, and became friends with Brancusi.  In 1949 he participated in a major exhibition at Galerie Colette Allendy with Deyrolle, Hartung, Soulages and Schneider  which firmly established Gilioli at the forefront of the avant-garde. In 1951 he became vice-president  of the prominent abstract group Espace, initiated by André Bloch, Fernand Leger and Le Corbusier. In 1957 Gilioli was taken on by the distinguished Parisian Galerie Louis Carré. During the next two decades Gilioli exhibited extensively and he divided his time working between Paris and St.-Martin-de-la-Cluze in Dauphine where Paquier is located.