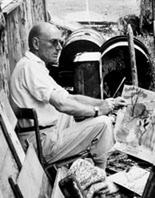 Describing his work as “paysagisme abstrait” Boissonnet became renowned for his passionately expressive oeuvre derived from the Bordelais landscape. He referred to his “combat avec l’ange” (fight with the angel) constantly striving to transcend his consciousness to reach the “absolute” [truth]. The critic Pierre Cabanne wrote about his work “a tumultuous calligraphy, enveloping or broken, the marks of a never ending fight, the singularity of a profound person… A painting from Boissonnet is a microcosm of Earth in its creation. The painter is not in front of the world but in-between, that’s why Boissonnet’s landscapes aren’t identifiable, they are experience and sensation.”

Born in Bordeaux, Boissonnet first studied woodcarving at the École des Beaux Arts de Bordeaux, and in 1922 was awarded the Premier Prix de Sculpture. But he soon turned to painting and became a leading member of AIB (Independent Artists of Bordeaux) in 1927, which fought against the academic art that domin region. The society attracted several major painters including Picasso, Matisse, Tal-Coat and André Lhote, and these encounters were influential on Boissonnet.

Encouraged by Raoul Dufy and Pierre Bonnard, Boissonnet dedicated more time to painting, and also became a close friend of the influential Cubist artist André Lhote who famously advocated the importance of nature in art. In 1942 he took a studio in Paris, and exhibited at the Salon des Tuileries in 1946. He was awarded second place in the Prix Drouant-David de la Jeune Peinture and which gave him access to the famous avant-garde Salon de Mai in 1948, where he developed friendships with Pignon, Borés or Lanskoy. In 1950 he built a house and studio at Piquey on the scenic Bassin d’Arcachon north of Bordeaux, and here his work became increasingly abstracted. He exhibited at the 1951 Biennale de Turin and was awarded the Prix de Biennale de Menton in 1955. In 1956 he had his first solo exhibition at Galerie Saint-Placide in Paris, and the following year at Galerie de l’Élysée where his work was selected for the Prix de la Critique. At the Salon de Mai that year his painting “Régates à Arcachon” was bought for the national collection. In October 1961, his work was installed at the Maison de la Pensée Française, following an exhibition of Lhote’s work. Regular exhibitions continued, notably in 1962 Tokyo, and the Musée d’art Moderne de la Ville, Paris; 1971 Galerie de Paris, and Munich; 1977, Fondation Soulac-Medoc; 1980, Galerie René Drouet, Paris; 1981, Fondation Aquitaine; 1982, Grand Palais, Paris; and in 1992 a retrospective was held in Bordeaux.

Boissonnet also received several public commissions for works in Bordeaux University, and churches at Echourgnac, Marmande and Condat. In 1968 he collaborated with the artist Dupuy on a mosaic for the observatory at Floirac. In 1984 a film “Boissonnet, un Aventurier de l’Abolu” was made by Jean-Pierre Mitrecey, and presented at the Musée d’Art Moderne in Paris.

The Musée des Beaux Arts de Bordeaux now has a substantial collection of the artist’s work, and held a major retrospective in 2006.