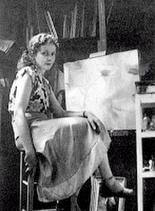 Christine Boumeester became internationally renowned for her evocative abstract paintings that incorporate a mystical surrealist element, which is perhaps best described by her artist husband Henri Goetz, “each of her works has a mysterious undefinable presence, imprinted with her own unique poetical expression”.  Boumeester was of Dutch origin though her childhood was spent in Djakarta in Indonesia before moving back to Holland in 1921 where she attended the École des Beaux Arts at the Hague from 1922-1924. Her early work was based on fantasy imagery, and she held her first solo exhibition in Amsterdam at Gallery Santee Landweer in 1935.  The same year, she moved to Paris where she took a room on rue Guy-Lussac, and enrolled at the famous Académie de la Grande Chaumière where she met Henri Goetz whom she married a few months later. Together they became involved with a group of avant-garde artists known as the École de Puteaux, and included artists such as Reynold Arnould, Marie Raymond, André Lhote, and Jacques Villon.

Despite the extra difficulties presented by society for women artists, her determination and talent gained her acceptance into the highest avant-garde circles, and she developed an important friendship with Hans Hartung, whose influence at this time encouraged her to explore further into abstraction. In 1937 she held her first solo exhibition in Paris at Galerie Bonaparte, the success of which lead to her being represented by Jeanne Bucher who was highly influential in the promotion of abstract art and at her eponymous gallery, Boumeester exhibited regularly over the next few years, often in the company of Schneider, Hartung, Viera da Silva, and Kandinsky. With the outbreak of the war Boumeester and Goetz retreated to Nice where they met up with the surrealists, André Breton, Dotremont, Ubac, and Magritte. This encounter was highly significant for Boumeester as her work had always retained atmospheric undertones that shared affinities with the Surrealists, and in the ideas of these artists she found endorsement of her own pictorial language. During this period, whilst fighting for the Resistance in 1941, Boumeester also founded with Ubac and Dotremont the avant-garde journal La Main à Plume.

Following the Liberation Boumeester returned to Paris and a series of high-profile exhibitions over the next few years established her international status as a leading abstract painter. Since her death in 1971, Christine Boumeester’s work has been celebrated  in numerous retrospective exhibitions notably in Frankfurt, Paris, Amsterdam, Lille, Cannes, Amiens, Vincennes, and a permanent museum, the Musée Goetz-Boumeester, in Villefranche-sur-Mer, has been dedicated to her and her husband’s remarkable lives.