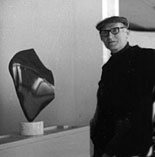 Born in Milan, Signori travelled to Paris in 1924 and enrolled at the Academie André Lhote before training at the Académie Ranson in 1935 under Malfray where he turned entirely to sculpture and worked alongside Stahly, Etienne-Martin and Manessier.  In 1948 he won a competition for a monument to the anti-fascist activist Rosselli brothers, and was soon after awarded the Prix de Paris in 1950 for his “Vénus Noire” carved out of black Carrara marble, and from this point on he would always use Carrara marble which is one of the finest in the world and he would divide his time between the North Italian quarry and Paris.

“Portrait pour Raymonde” is a superb example of Signori’s graceful style for which he received great acclaim.  The shape and the material are not only aesthetically pleasing to the eye, they also diffuse a human warmth.   Like Brancusi before him, Signori was interested in conveying the essence of life and it is well known that external light penetrates and gives life to works of art but in Signori’s case, the light comes from within his sculptures. Signori’s intense relationship with his materials has had a huge influence on his artistic development. His early work was of a post-Cubist influence but Signori became pre-occupied with revealing the natural properties of the stone  and sought to evoke “a precious and invisible aura” and this is certainly the case  with “Portrait pour Raymonde”.

Signori exhibited extensively in Italy and Paris, and regularly participated in the avant-garde Salon de Mai and Salon des Réalités Nouvelles. In 1956 he was chosen to represent Italy at the International Venice Biennale, and in 1958 he was given a solo exhibition at the Biennale. In 1962 he won the Prix International de la Ville de Carrara,  and in 1966 was awarded a major retrospective at Galerie Charpentier in Paris.

The artist's work is now represented in museums of Modern Art including the Musée d'Art Moderne de Paris.