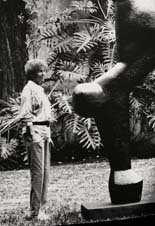 Liuba developed an international reputation during the 1950’s for her monumental aesthetic inspired by ancient cultures particularly Maya-Toltec, Aztec and Inca. “Oiseau” is an excellent example of her oeuvre in which she re-interprets cross-cultural depictions of animal and plant forms in a post-war Modernist context. As Sam Hunter remarked, “The new semi-abstract, heroic style of the mid-fifties, seen in biomorphic creatures that are personal equivalents of hybrid Assyrian warriors or heraldic Mycenaean beasts, set her apart from her contemporaries in formal terms while keeping her work in the mainstream of Modernism.”

Born into a cultural family in Sofia, Bulgaria, the Brazilian artist Liuba has spent most of her working life between Paris and Sao Paulo. Having left Bulgaria in 1943 to avoid the strictures of communism, she enrolled in the Ecole des Beaux-Arts in Geneva.  The following two years were spent in Zurich, where she studied with the French sculptor Germaine Richier. Whilst not assuming Richier’s tortured figurative imagery Liuba put a greater emphasis on serenity, solidity, substance. After the end of the Second World War Liuba went with Richier to Paris and continued to work with her until 1949.

From 1947 she began exhibiting in the annual Salon d’Automne in Paris (winning a prize in her first year) and the Salon des Tuileries.  The Galeria Domus, Sao Paulo, put on Liuba’s first solo exhibition in 1950; and throughout the following decade she held solo shows at several galleries in Paris and Sao Paulo.  From 1954 following extensive travel around Europe, north Africa and the Americas, observing the motifs of ancient cultures, her work became significantly more abstracted and stylized.

In 1958 Liuba married the artist Ernesto Wolf.  In 1962 she won the National Modern Art Prize in Brazil.  In 1963 she was awarded another prize at the Biennale of Sao Paolo, going on to show again there in 1965, 1967 and 1975.  The Musée de Saint-Paul de Vence held an important solo exhibition of her work in 1968. The following year she received a prize at the Salon de la Femme in Cannes. She participated four times in the “Panorama of Brazilian Sculpture” show (1970, 1973, 1976, 1979) held by Sao Paulo’s Museum of Modern Art.  Her first solo exhibition in London took place in 1972 at the Achim Moeller Gallery, which held further solo exhibitions of her work in New York.  In the 1970’s Liuba introduced a new textural emphasis to her work simplifying the forms whilst still keeping the sense of proportion and balance which has always been fundamental to her sculpture.  She has executed many public commissions, notably at Quai Saint-Bernard, 5th Arrondisement, in Paris as part of the Collection Musée Municipal de la Sculpture en Plein Air.  After 1989 Liuba worked between Paris and Appenzell, Switzerland.