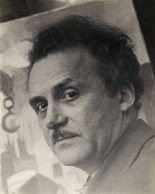 André Lhote’s substantial contribution to the development of the theoretical framework of Cubism was highly significant, and established the artist as one of the most important figures of the School of Paris. When André Lhote arrived in Paris as a young but confident artist from Bordeaux in 1908, the Cubist group was in its infancy. Lhote had already been exhibiting at the major Paris salons such as the Salon d’Automne, and the Salon des Independants as early as 1906, and he was eager to engage himself with this group of radical artists who included Picasso, Braque, Metzinger, and Gleizes. But Lhote was an intellectual aswell as a painter, and was not content to merely join the  group and support the movement, instead, whilst accepting the general principles of the group, Lhote criticised the formulaic esoterical approach of Gleizes’ Analytical Cubism, countering it with his own more pragmatic variation. Lhote applied his French Cubism to scenes of everday life, as opposed to the still-life or “nature-morte” on which the other members of the group concentrated their work. The eminent critics of the time were soon proclaiming Lhote’s genius, and Lhote held his first one-man exhibition at Galerie Druet in 1910. From here went on to exhibit with the group in major groundbreaking exhibitions including the famous Section d’Or show of 1912.

André Lhote possessed an immense amount of cultural knowledge, and after the war he became professor at various academies, before founding his own academy on rue d’Odessa in 1922. The influence of Académie André Lhote on the next generation of artists was to prove extensive, numbering artists such as Singier, Pignon, and Manessier amongst the attendants. Lhote continued to paint as his primary activity, constantly striving to find new solutions to the challenge of pictorial representation, but always resisted the tendency towards the non-representational.

Over the next thirty years Lhote exhibited extensively at major galleries in France and abroad, but most regularly at Galerie Guiot in Paris. During his active career  he was art critic for the Nouvelle Revue Française  from 1918-1940, and also published many scholarly texts on art theory, focusing on aspects of Cubism and landscape painting. During the 1950’s Lhote was widely celebrated, featuring prominently in “Le Cubisme” exhibition at the Musée Nationale d’Art Moderne in 1953; represented France at the Venice Biennale in 1954; awarded the Grand Prix National des Arts in 1956; and a major retrospective at the Musée Nationale d’Art Moderne in 1958.

His contribution to the development of Modern Art in the twentieth century was highly important, and since his death André Lhote has been honoured with regular museum exhibitons dedicated to his remarkable achievements.