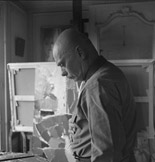 André Lanskoy was one of the foremost abstract painters of the post-war École de Paris, and in the words of the influential critic Pierre Guéguen: “one of the greatest of all abstract painters”. Born in Moscow in 1902 Lanskoy (André Michailovitch) was the son of a Count and reputedly one of Catherine the Great’s favourites. Having studied at the Academy of Fine Arts of St.Petersburg, Lanskoy joined the White Army in the Russian Revolution in 1919, as a result of which he soon found himself in exile, which lead him to Paris in 1921. Here he set himself up in a tiny garret in rue Delambre where he painted largely in isolation, rejecting all instruction. To start with he associated mainly with fellow Russian painters Soutine, Bart, and Térechkovitch with whom he held an exhibition at Galerie La Licorne in 1923. His work instantly made an enormous impact and the following year he was invited to exhibit with Delaunay, Survage and Zadkine, at Galerie Carmine. Further success followed when he exhibited at the Salon d’Automne and was noticed by the great collector Wilhelm Uhde who proceeded to acquire Lanskoy’s entire artistic output for the next two years. Uhde also introduced Lanskoy to Galerie Bing, at 20 rue La Boétie, where he subsequently signed a two year contract and held his first one-man exhibition, from which several museums purchased work including Manheim, and Antwerp.

Lanskoy’s work from this early period consisted of bold figurative compositions, but from 1937 he began to explore abstraction. Striving to disengage figuration, he achieved his first abstract works in 1940. He held his first  exhibitions of non-figurative works in 1944 at Galerie Jeanne Bucher, and it was here that he encountered his compatriot Nicolas de Stael, with whom he struck up an important friendship. Lanskoy’s success as an abstract painter was fully endorsed when he began a sixteen year collaboration with Louis Carré, who was already showing Picasso, Matisse, Hartung and Soulages. In 1948 at Carré’s eponymous gallery at 10 avenue de Messine, Lanskoy held an important one-man exhibition titled Lanskoy, Oeuvres 1944-1948, and furthermore in 1952 and 1957. His lyrical and dynamic abstract compositions were a revelation in the climate dominated by cold geometric abstraction, and although Lanskoy refused to be categorised, he was undeniably an important forerunner of Tachisme. It is interesting to make a distinction here between Lanskoy’s work and that of the american Abstract Expressionists, and is best defined by Marcel Brion’s term “Abstract Impressionism” for Lanskoy’s style is not merely gestural manifestation of inner emotion, on the contrary, it is an evocation of exterior sensation.