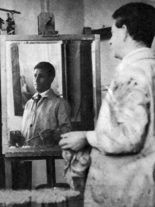 Robert Bérény was one of the leading Hungarian artists of the early twentieth century, at the forefront of the avant-garde, he was enormously influential in the 1919 revolution and in bringing Modern Art to Hungary. Initially studying under Tivadar Zemplényi in Budapest in 1904, he was then drawn to the fervent avant-garde atmosphere of Paris where he attended the École des Beaux Arts and the Académie Julien, under Jean Paul Laurens. He became inspired by the radical pictorial techniques of the Post-Impressionists, Cezanne, Van Gogh, and Gauguin who were breaking down convention and freely experimenting with new modes of visual language. He exhibited his work at the Salon des Indépendents, and the Salon d’Automne. In 1907 he travelled to Italy with Bertalan Pór. By 1910 Bérény had returned to Budapest where in 1911 he co-founded the “Group of Eight” with Dezso Czigany, Bela Czobel, Karoly Kernstock, Odon Marffy, Dezso Orban, Bertalan Por and Lajos Tihanyi who together rebelled against tradition. They held an exhibition that year at the National Salon which caused great controversy over their unnatural colours and forms, but they received acclaim from the more progressive critics, and a second exhibition was held the following year. The development of Bérény’s own expressionistic style is evident in his portrait of his friend the composer Béla Bartók from 1913, which would be exhibited at the 1915 San Francisco World Exhibition. In 1914 the group exhibited at the Viennese Bruko Salon. Events in Hungary then became dominated by the mounting revolution, for which Bérény’s poster design “To Arms!” became a symbol. However following the collapse of the revolution in 1919, Bérény was forced to emigrate to Vienna and then Berlin where he worked as a composer until 1926 when Hungary had re-stabilised. On returning to Budapest he was highly celebrated and exhibited regularly including at the Ernst Museum, 1928; Tamás Gallery, 1929, 1932; National Salon, 1929, 1932; “Hungarian Post-Impressionists”, Konyves Kalman Salon, 1931; and chosen to represent Hungary at the Venice Biennale in 1928, 1934, and 1936.

During the 1930’s Bérény associated with the Gresham Circle, a group of artists and cultural figures who would meet at the Gresham Palace Coffee House, including Istvan Szonyi, Pal Patzay, Jozsef Egry. They proved highly influential in all branches of the arts during this period. Bérény also became renowned for his innovative advertising graphic designs. In 1936 he was awarded the Szinnyei prize and continued to exhibit widely. Unfortunately during the Second World War his studio was destroyed and many works lost, but he shall always be celebrated as one of the first great Modern artists in Hungary, and continues to be the subject of regular museum exhibitions.