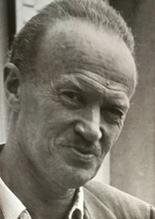 Janikowski was a Polish émigré, who settled in Paris after the war, and became an acclaimed exponent of post-war geometric abstraction, exhibiting regularly with the Réalités Nouvelles group famous for championing the movement.

Mieczyslaw Tadeusz Janikowski was born in Zaleszczyki, part of South East Poland which was taken over by the Russians in 1939 and is now part of Ukraine. He spent his youth in Olkusz, before following in his brother’s footsteps and studying law at the Jagiellonian University in Kraków. However in 1934 he abandoned his studies and entered the Matejko Academy of Fine Art, where he studied under the likes of Jarocki, Sichulski and Filipkiewicz. He graduated from the academy in 1939, a few weeks before the outbreak of the Second World War. He fought in the Cavalry regiment, and when they were defeated he defied orders and entered Hungary, whilst most of his colleagues were subsequently killed in camps. He then went on to serve the allies as a commander of the Armoured division, and while taking part in the liberation, Janikowski was seriously wounded during the Battle for Baarle-Nassau at Alphen.

Following the war Janikowski recovered and went to study at Edinburgh College of Art, where his work was becoming increasing abstracted as he was drawn inexorably towards a pure harmonious equilibrium. In 1947 he received a scholarship and moved to Paris, where, after spending a year in London, he permanently settled in 1952. Befriending his compatriot Stanislaw Grabowski, he obtained a studio in the famous “La Ruche” building, at 2 Passage de Dantzig, (inscribed on the stretcher of this work), which since the Cubists had become the heart of the Parisian avant-garde. He began exhibiting at the avant-garde salons, and in 1956 he exhibited at the high profile Galerie Colette Allendy, and in 1959 was awarded the “Kultura” prize.

The artist works are now represented in the National Museum collections in Warsaw, Kracow, Gdańsk and Poznań; the Museum of Central Pomerania, Slupsk; Museum of Architecture, Chelm; Museum of Sanok; and the Art Museum of Łódź