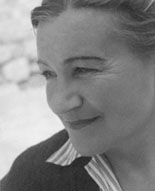 Marie Rosanovitch was the daughter of a Polish nobleman and a Russian actress (from whom she took the name Vorobiev). She studied in the Caucasus and Moscow in 1910 at the Stroganov Academy, continuing in Italy where she arrived in 1911. An intimate friend of Maxim Gorky from her time in Russia, he profoundly affected her development, encouraging her to paint, and it was him who suggested her pseudonym ‘Marevna’ from a Russian fairytale meaning ‘princess of the sea’. In Paris in 1912 she was introduced to artistic circles by the Russian writer Ehrenbourg whom she had recently met. She worked at the Academia Colarossi and the Russian Academy where she met Chana Orloff, Zadkine and Lipchitz, and took a studio in the famous La Ruche building which was the heart of the Parisian avant-garde, and here she became acquainted with Picasso, Modigliani, Lhote, Juan Gris and many others from the Paris circle.

Establishing an artistic reputation, she exhibited at the Salon des Tuileries in 1912, the Salon des Indépendants in 1913, and Salon d’Automne in 1919, and was considered to be the leading female painter of the Cubist movement. During this period her tender humour was always present in the play between curved and angular forms suffused with vivid colour. After 1918 her technique turned towards neo-Impressionism, with portraits and landscapes in both oil and watercolour, and produced exquisite pointillist works of which this is a magnificent example.

Whilst in Paris Marevna had met and fallen in love with the Mexican painter Diego Rivera they had a daughter, Marika in 1919, but after a brief marriage he left them to return to Mexico where he later married Frida Khalo. But throughout her life Marevna remained devoted to Rivera and would tell her daughter that each painting was for her father, and at her death her ashes were laid in Rivera’s mausoleum in Mexico.

Marevna exhibited widely in France and Europe throughout her career, as well as at the Guggenheim Museum in New York in 1968; and recently a major retrospective was held at the Russian State Tretyakov Gallery in Moscow, in 2004. A small collection of her work is held at Athelhampton House in Dorset where she lived with her daughter during the 1950’s. Her work is also in several museums including a substantial collection at the Musée Petits Palais in Geneva.