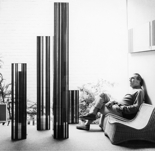 Luc Peire was an internationally renowned exponent of post-war constructivist abstraction. Part draughtsman, part spiritualist, Peire sought to achieve ultimate harmonious equilibrium which he referred to as metaphysical abstraction. The balance of colours and lineal rhythms relate to the source of his inspiration for the work whether it be an event, an emotion or a piece of music. During the 1960’s he extended this approach to whole scale installations or “Environments” in which the walls became part of his composition and the floors and ceilings were mirrored creating an infinite spatial illusion, the first of these was installed at the Musée Nationale d’Art Moderne, Paris in 1967, for which he received international acclaim. Subsequent “Environments” are now in the collections of the Museum of Modern Art in Mexico and Museum of Modern Art in Auckland, NZ.

Born in Anvers in Belgium, Peire studied at the Institute Superieure des Beaux Arts, in Anvers during the 1930’s before holding his first solo exhibition in 1938 in Bruges. He quickly began to establish himself winning several awards over the next few years including the Prix Godecharle in 1942, Prix Art Jeune, 1943, and Prix de Rome, 1947. In 1945 he joined a group of young avant-garde artists known as “La Jeune Peinture Belge” and began to spend an increasing amount of time in Paris. His work at this time was much influenced by Constant Permeke and consisted expressionistic figuration. During the early 1950’s he spent much time travelling around Europe and developed creative friendships the Spanish art historian and critic Eduardo Westerdahl and the architect Alberto Sartoris. In 1954 he also became acquainted with the influential art critic and curator Michel Seuphor who became a great champion of Peire’s work. In 1959 Peire moved to Paris full time and participated in the progressive annual exhibitions at the Salon de Mai, and Salon des Réalités Nouvelles. His work was now entirely free from figuration and instead defined by recurrent vertical linear structures.