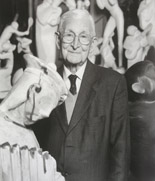 Ferdinand Parpan has become a highly celebrated European sculptor, and this work “Femme” from 1964 is a typically beautiful example of his uniquely stylized figuration. Having attended the Place des Voges in the 1920’s, Parpan started working as an engraver, but in the 1930’s inspired by the Art Deco sculptor Dardé, he began carving in wood, and stone. He soon had his first exhibition on Avenue Victor-Hugo in 1936, and was encouraged by the sale of several pieces. But his progress was interrupted when he was called up to fight in the war. Resuming his passion after the Liberation in 1944, Parpan took a studio in rue du Retrait in Paris with the sculptor Louis Roy. Whilst undertaking several public commissions to replace works that had been destroyed during the war, he became intrigued by the aesthetics of religious art and the veneration it evoked, and decided to adapt certain aspects into his own work to parallel the Modernist reverence of purity of form. This development defined the future of his oeuvre  and received universal acclaim. It is this characteristic elegance and refinement of form that so successfully defines this magnificent work “Femme”.

The artist’s work is represented in various museums of Modern Art including the Musée d’Art Moderne, Paris.